Stories
You are here: Home1 / Stories2 / Features3 / Christmas without all the trimmings

Even though public worship returned in many churches in South Australia in July, Pastor Fin Klein has a seemingly strange message for members of St Michael’s Lutheran Church Hahndorf this Christmas Eve: Stay home.

Of course, that’s not the end of the story. The idea is that each member family of the Adelaide Hills congregation will invite neighbours, colleagues, friends or extended family to their place to share fellowship, food and to watch 7pm worship via community TV or the internet. The hope is to have 50 to 60 St Michael’s members host as many guests as they are able, taking into account government regulations.

In other years, St Michael’s would expect to welcome up to 800 people to its main Christmas Eve service. Those numbers mean the congregation, which has been live-streaming a weekly service for 10 years and partners with Lutheran Media in that space, needs to take the service outside into its carpark. This year, with physical-distancing regulations still in place and, as of mid-November, increasing in South Australia, even the carpark won’t be big enough – hence the encouragement for congregation members to form a network of house churches.

St Michael’s will advertise this different Christmas worship in the community through letterbox drops, banners and social media. And anyone who would like to join in can contact the church and be connected into a group.

‘We asked ourselves, “How do we make the most of the situation we’re in? How do we use this still to give God the glory at Christmas?”’, Pastor Fin says. ‘It’s a big step of faith to go down this path. We know what we’ve lost, but now’s the time to find out what we’ve gained in the process, including those smaller connections which are a gift from God.’

‘One of the strengths of this is the relationship stuff’, agrees Music and Worship Coordinator Anna Klatt. ‘The outdoor service was an outreach event, where you can catch up a little bit, but it’s busy, so you can’t make any meaningful connections. But having it in people’s homes is a lot more intentional in terms of making connections. It also fits where we’re going as a congregation in terms of our discipleship culture.’

Christmas Eve hosts will be supported by receiving an intergenerational resource pack likely to include digital carols playlists, ideas around questions to discuss with guests, and activities and games for children.

Pastor Fin says leaders can also attend an earlier home gathering to ‘demystify’ the experience of hosting people for Christmas.

St Michael’s isn’t the only congregation which has needed to think creatively when it comes to Christmas worship or community outreach this year.

Further north in the Adelaide Hills, Lobethal Lutheran Church for the past 28 years has presented a ‘living nativity’ to the crowds which gather for the annual Lights of Lobethal Festival.

This year, with the festival cancelled, not only has the congregation had to call off the living nativity, but also an ecumenical carol service usually held in its church building as a prelude to the switching on of the lights to begin the festival.

Lobethal Pastoral Assistant Janet Le Page says that, with the people of Lobethal still being encouraged to light their houses as usual, the Living Nativity committee has been planning a static display for the church amphitheatre, including a stable and manger with signage explaining that, ‘God-willing we will return next year’ and that ‘Jesus is still the reason for the season’.

For the members of St Paul’s Box Hill, Victoria, who moved church buildings just as the pandemic took hold and were unable to worship face-to-face for around eight months, just the prospect of any face-to-face worship in their new home has them excitedly looking to Christmas.

If health regulations allow, they’ll have multiple small Christmas Eve services in the church and may use a combination of live and pre-recorded elements, as well as offering pre-recorded services on YouTube. Organ and Choral Music Coordinator Melissa Doecke also hopes to put together an intergenerational Christmas choir, with performances likely to be pre-recorded individually, then combined and included in worship.

Child & Family Ministry coordinator Keren Loffler says St Paul’s will also support more children, youth and families from the congregation this Advent through the take-home ‘Advent in a bag’, which contains Grow Ministries Growing Faith at Home resources and activities.

And, in terms of community outreach, they have taken inspiration from Melbourne’s lengthy time in lockdown, by creating a ‘Spoonville’ nativity for Advent. ‘Spoonvilles’ are communities of characters made out of decorated wooden spoons put into the ground in public places by passers-by. They sprang up around the Victorian capital this year, with people contributing during their permitted outdoor exercise time.

‘We’ve created a Spoonville nativity with the basic characters, with the idea being that the community can come and add spoons and we’ll be part of the Christmas story together’, Keren says. ‘And then we’ll have something like a QR code or link to the website on which we can show our Christmas story video or “Away in a Manger” virtual choir, so people can link in and see our service times.’

At St Petri Lutheran Church in South Australia’s Barossa Valley, the congregation usually hosts a gathering called ‘Christmas on the Green’ with nativity and carols in the town of Nuriootpa’s main street, which can’t go ahead. Child, Youth and Family Ministry Director Sharon Green says St Petri has decided to remodel its community outreach into ‘Christmas at the Mall’.

There will be a nativity scene set up outside the local shopping mall before Christmas, while musicians and singers will share carols, members will hand out 200 Christmas bags for children and families, and a group from the church will be dressed as nativity characters.

St Petri has also filmed its fifth online message this year for its local Messy Church community, with the latest featuring a skit posing the question ‘What is the true meaning of Christmas?’.

South of the Barossa Valley at Gawler Lutheran Church Christmas will sound a little different this year. An intergenerational ukulele group will provide a unique musical framework for the congregational Christmas play, ‘An Aussie Christmas’.

The group features 14 regular players, including four children under 10 and four over-60s with the remainder aged between 25 and 40, who all ‘appreciate the chance we have been given to praise God and help others to do so as well’.

END_OF_DOCUMENT_TOKEN_TO_BE_REPLACED 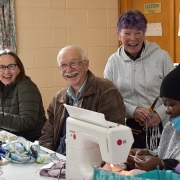 A stitch in time builds lives 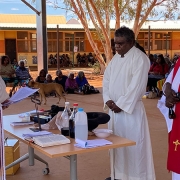 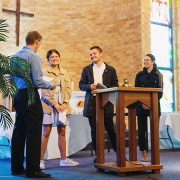 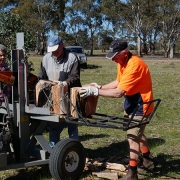 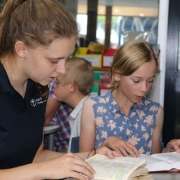 Is this your new watering hole?
Scroll to top