At 32 weeks into the pregnancy, Karen Dymke discovered via an ultrasound exam that her third child was to be born with half a brain.

‘If I ever go to hell it will be to an ultrasound room’, she says. ‘I was called back at 32 weeks’ gestation to have a routine ultrasound check regarding my third child’s kidneys, which had been identified as slightly dilated. It was not a big deal, they said.’

After the initial check-up, they were told all was well. They then learnt there was a new ultrasound machine which would enable them to see the baby in more detail if they wished. They agreed but, as the new details of the baby emerged, the mood in the room changed.

‘He said, “I’m very sorry. There is something wrong with the baby’s brain”.’

Karen says a great debate ensued as to what to do. Her specialist wanted to operate urgently as the outlook was ‘dire’. But the radiographer assured them that often things can look bad on ultrasound but can rectify themselves.

She was able to go to a full-term pregnancy. On 6 December 1990 Jordan was born.

‘He looked perfect. You would have had no idea that anything was wrong’, she says. ‘There was no pressure in his brain, yet half of it was missing. They had no idea why or what to do and the prognosis was really negative. Would he talk? Would he walk? His function would be really limited.’

Karen spent more than a month with Jordan in hospital. There was a long and seemingly constant stream of appointments, tests and surgeries.

No-one seemed to know why this had happened.

Looking back, almost 30 years on, she says the first year of his life is a blur. Her marriage broke down and she relied on the help of her parents and in-laws as she cared for Jordan and her two young girls.

Her Lutheran church families in suburban Melbourne – firstly at Croydon and later at Box Hill – rallied around with support, love, prayer, house cleaning and whatever else was needed for the single mum and her family.

‘I have no idea how I would have survived my life if it wasn’t for my church family and also for our immediate family’, Karen, who remarried and had a fourth child, says. ‘Church family adds an amazing additional layer of community and support and care and concern.’

But, ultimately, she says Jordan’s birth was a ‘watershed moment’ for her.

‘It just changes your whole perspective of the world,’ she says. ‘I’ve got a little picture of Jordan from when he was born. The world changed from that moment.’

Jordan didn’t learn to walk until he was about three years old and didn’t talk clearly until he was eight. He still struggles with language due to having had a stroke at two. Already known to have cerebral palsy, Karen thought his struggle with reading was due to dyslexia but, when he started high school, he was diagnosed with a mild intellectual disability. This was a terrible shock as he had always seemed so bright and aware.

Now 29, he is above average in abstract reasoning, has a wicked sense of humour, lives independently and works full-time as an artist producing work across a range of media for two studios. He also plays basketball in a Special Olympics team, has been a cross-country running champion and goes to the gym regularly. As Jordan will tell you, he is ‘as handsome as he was when he was born’!

Despite the challenges Jordan and his family have faced, Karen says he has been her ‘gift’.

‘But if I had found out at 32 weeks that an option was to maybe abort that baby, I would not have the gift that I’ve got today’, she says. ‘It hasn’t always been easy. There have been surgeries, missed milestones, lots of appointments, personal challenges.

‘But I wouldn’t give him up for the world. I would not be the person I am today if it wasn’t for Jordan. He has taught me patience, humility and to have a sense of humour – we survived by having a sense of humour. And to never, ever judge anyone as less than you.

‘I don’t believe that God gives you suffering, but I think that from suffering we can learn lessons and it wakes us up.

‘God has held us up through family, our church family and dear, faithful friends walking beside us. They are the hands and feet of Jesus.

‘Having the gift of a child who’s born with a disability is about stripping away all of those expectations we have of perfection. Instead we receive a gift who teaches inclusion and love.

‘Please, please respect each life. Each life is precious. Each unique. Each a gift. Each teaches us how to love. Jordan and I stand testament to that.’

Watch a video about Karen and Jordan at www.youtube.com/watch?v=YQmjCtE4YGI

END_OF_DOCUMENT_TOKEN_TO_BE_REPLACED 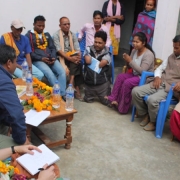 Side by side, every step of the way

Gifts of Grace
Scroll to top